Okay, I admit it. I love Wil Wheaton. Hmm. Honestly, I don’t know him, so I can’t really say that. However, I love his writing; it is so clear, interesting, and makes me feel like I know him. I guess it would be more honest to say that I love those parts of him he has chosen to reveal of himself in his writing, but that sounds awkward.

While I have kept current on Wil’s blog for a long time, it is only now that I have finally read his book Just a Geek. It came out in hardcover while I was living in Africa and wasn’t able to pick up a copy easily. O’Reilly has just released it in paperback and I happened to be paying attention, so here we are. 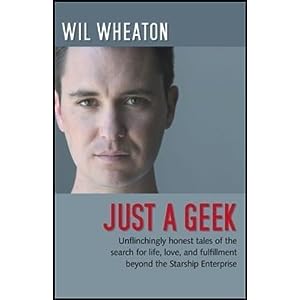 Wil is funny. He is honest about his struggles and humanity, including the not-so-pretty bits that we all know we are trying to hide from one another. He admits that at the time the book was written (2004) this was a new thing. After following his blog for years, I will add that we have all benefited from his personal epiphanies and catharsis.

I don’t want to steal the joy of reading the book and so I am struggling with what to share. I’ll simply say that this is a sort of annotated diary that chronicles Wil’s journey from successful childhood movie actor to teenage Star Trek: The Next Generation star who loved the geek aspects of being a part but found the part limiting at times and the fan criticism hurtful to a struggling actor to coming to grips with all of these and realizing who he really is and what he is meant to do. Wow, that was a long and rather tortured sentence. It is a pretty accurate description of the book, although it leaves out all the bits that made me laugh so hard on the city bus that people turned around to look at me and stare.

Oh, and there is a promotional quote from Cory Doctorow on the back cover and a forward in the book written by Neil Gaiman. Seriously, any geek who knows who either or both of those two guys are will probably love the book. I did.

Disclosures: When I noticed this was being rereleased, I asked O’Reilly for a review copy and they graciously sent it to me gratis. I write for O’Reilly, and I like them. I don’t know Wil, but I wish I did and I kind of hope he sees this and gives me advance notice next time he is going to be in Tucson for a con because I missed the last one and only found out when I saw a picture of him with a friend of mine on Facebook.