Not too long ago I found myself waiting around for something and with nothing to do. That sort of leisure time is rare for me, but when it comes I try to use those moments to pursue things that I enjoy. Reading is one of those pleasures. I happened to be near a bookstore and walked in. While browsing I picked up a book with an all black cover and the title in all capital white letters, BURN THIS BOOK. I had to pick it up for a closer inspection. 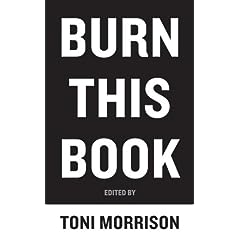 The book is a short collection of essays by published authors all centered around the ideas of censorship and the power of literature to inform our understanding of the world. It was edited by Nobel Prize winning author Toni Morrison. All of the writers are members of PEN American Center, which strongly and actively advocates for freedom of the press and the unhampered expression of ideas around the world.

You would think that in this collection of essays the writers would focus on the evils of censorship, but you would be wrong. Instead, each tries to answer the simple question, “Why write?” Writing is viewed not so much as a political tool, but as a means of communicating the depth of human experience, thought, feeling, and insight from one person to another. It is in this that these writers find purpose. The goal is simple: to express in narrative what is contained in the soul. When we silence those who feel compelled to speak, we lose a part of our collective humanity.

I was fascinated by the repeated theme that the writer who is most effective is the one who writes for herself. It is not the goal of an artist to express what others want to see or hear, but to express the unique understanding and perspective he has which he can no longer contain. I have felt this compulsion on two occasions and can testify that my best writing has happened when I gave no consideration to my audience while writing, but only after I had fully expressed what I felt had to be said–only then could I work to find a way to express it more powerfully or comprehensibly to a specific audience.

If you are interested in the power of the written word and what opinionated and interesting writers have to say about it using language that is both beautifully and skillfully crafted, you should pick this book up. It is one that I have savored, reading only one essay at a time so as to give me time to think about the ideas presented, absorb them, and savor the quality of the phrasing, hoping that the experience would not end too quickly.

I feel inspired to start making time to write another book, just for myself again and not for money. I’ve no idea when it will be finished, but I have a narrative inside me that is crying out to be shared. This book caused that reawakening.

Disclosure: I bought this book. I reviewed it solely because I liked it and thought others would as well.