I first read about this graphic novel adaptation of Ray Bradbury’s classic book about a month ago. I was immediately intrigued. The original book is one of my all time favorites and I wanted to see if a graphic adaptation could do it justice. In short: it does. 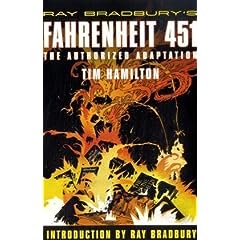 Tim Hamilton and the folks at Hill and Wang, with the blessing of Ray Bradbury, who writes the introduction to the book, have produces a beautiful and well crafted retelling of the classic story that is both true to the original and able to stand on its own.

For those unfamiliar with the story, Guy Montag is a fireman, only in his world firemen don’t put out fires, they start them. Books are banned and are the target of the firemen’s activity. One day, Montag meets a person who intrigues him with her joie de vivre. He has never met anyone so alive and vibrant and he wonders why. He also begins to look at his own life and realizes he is not happy, that there is something missing. The rest of the tale revolves around his struggle to find meaning in a sterile, inoffensive world where everything is brought down to a common denominator of homogeneous agreeability. I won’t spoil your enjoyment by revealing more than that.

Those of us who know the story well will note a few details are missing from this adaptation. Like when a movie is made, in this graphic novel it appears that some details of the written story were sacrificed to enable a cleaner telling in the new medium. Again, to avoid spoilers I won’t mention here what has been left out, but I will say that the overall structure and message remain intact and the story does not suffer from the loss. Instead, those who move from this as an initial taste will find the book richer and even more enjoyable.

What about the artwork? That is the main point here, isn’t it? I loved it. The artist chose a wonderful style to convey the emotion and action that is reminiscent of the minimalism of 1940s propaganda art, with a limited color palate on each page and just enough detail to convey the main point. Please don’t read that to mean the art is simple or simplistic. On the contrary, Hamilton does an amazing job of choosing which details are most important and distilling the scenes down to only those which further the plot, emotion, or scene. Extraneous information is nowhere to be seen. That can only be by design and due to the disciplined intent of the artist. Detail that is useful is everywhere, and throughout the book the art complements the text beautifully while taking nothing away from it. That is an achievement.

I confess, I am a reader. I always have several books being read concurrently, stashed here and there for convenience. Fahrenheit 451 is a book I have read several times and which I love. I admit there was some trepidation when I heard about it being adapted into a new form. In this case, none was needed. I am not only pleased by the quality of the graphic novelization, but happy to recommend it. In fact, this makes me want to request a few other classic novels to be adapted, not as replacements, but as introductions to whet the appetites of the curious in the hopes of satisfying their initial curiosity about the works as well as convince some who might not otherwise to delve in and read the originals. Now, I wonder where I put the publisher’s email address?